Her name is Emily, a self-described “sustainability nerd” enrolled in the Environmental and Sustainability Program at UBC.

For two weeks in November 2013 and despite her workload, Emily was everywhere, first and in the forefront of the Vancouver campus Ripple Effect campaign. The initiative was designed to create ongoing, long-term sustainability awareness among her 64,000 or so fellow students and faculty on how each individual can, by making small conscious choices, positively affect the environment.

Not bad for a fictitious undergraduate who was only conceived a few months prior to the Ripple Effect campaign launch and, says Margaret Doyle, developed as “part of the cross-platform narrative designed to ‘port the campaign across multiple touch points.”

“Emily?” says Doyle, UBC’s inaugural digital storyteller. “She just popped into my head fully formed as a character.” Once there and along with communication designer and illustrator Mark Pilon who created the visual identity for the character, the story of Emily took shape. Communications specialist Jeffrey Preiss, designers Matt Warburton and Arlene Cotter and communications coordinator, Jamil Rhajiak helped the Emily persona emerge across a myriad of media, with the voice of the cheerful, inquisitive, transit-taking, caffeine-slurping virtual ‘ambassador for sustainability’ supplied by grad student Sarah Chow.

Created and made whole, Emily was set to work. Interior bus ads, compostable coffee sleeves and paper napkins, digital ads, the animated story A Day in the Life of a Living Lab and even appearing in the Norm Theatre as a ‘trailer’ during the campaign, Emily popped up everywhere in what was the first-of-its-kind sustainability campaign for UBC.

Or as the campaign’s tagline put it: Make a ripple. Join a wave. Create a better world.

The 20 ‘pop up’ Ripple Labs alone were complex, comprehensive and very busy with topics ranging from ‘Discover the Bowels of a Building’ to ‘Recyclemania at the Opera’ to ‘Smart Rides to Class’. Education was a defining factor and one of the labs was held at UBC’s ecologically astounding Centre for Interactive Research on Sustainability (CIRS) with CIRS leading force Dr. John Robinson who took students and visitors through what Emily calls the “insanely cool” building and what in effect is a “ginormous piece of research equipment.”

Going by the post-campaign surveys, the character of Emily and those working behind the scenes made a positive and lasting effect on students’ awareness of sustainability, rippling into their own futures.

Preiss says the Ripple Effect campaign was important because whereas UBC has long done the right thing in terms of real action, “much of our deeply integrated sustainability work goes unnoticed. We wanted students to actually understand, through experiential labs and events, what UBC is doing on sustainability.”

The Ripple Labs were coordinated through the UBC Sustainability Initiative office (USI) with USI staff members Jen Crothers, project manager, and Preiss working in collaboration with UBC Communications and Marketing. Doyle says the goal was to attract attention: “They were meant to be disruptive in a positive way. They were designed to engage in interesting ways that would foster more awareness of the sustainability initiatives at UBC.”

Awareness such as bringing cows on campus to ‘talk’ about the UBC agriculture program in Agassiz was not only “epic”, recalls Doyle, it was a big hit. Not just with UBC students but from the public and especially with the enthralled kids from the campus daycare: “The natural conversation that flowed out of those labs really showed up in social media where the hashtag, #RippleEffectUBC came alive.”

And stayed alive, kicking and thinking. When surveyed post-campaign:

Fifty-nine percent of students from the Vancouver campus who participated in the Open Minds Forum (a quantitative market research platform) said they were aware of the campaign and/or recalled events or activities from the campaign;

Sixty-five percent of those who experienced any element of the campaign felt that their knowledge of UBC’s sustainability initiatives had increased ‘somewhat’ or ‘greatly’; and

Sixty-three percent of those who experienced the campaign reported being ‘somewhat’ or ‘greatly’ inspired to become more sustainable in their own lives.

Although the campaign was basically a version of “trans-media lite” and relatively brief, Doyle says it’s living up to its name:

“Months after the campaign, the hashtag was still being used, which tells me that the concept of making a ripple – that a small contribution or choice you make in your daily life collectively adds up to real change in the world – resonates with people.” 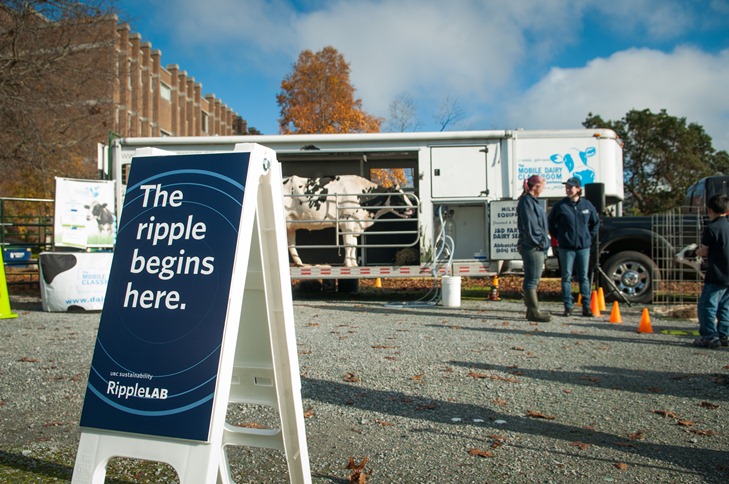 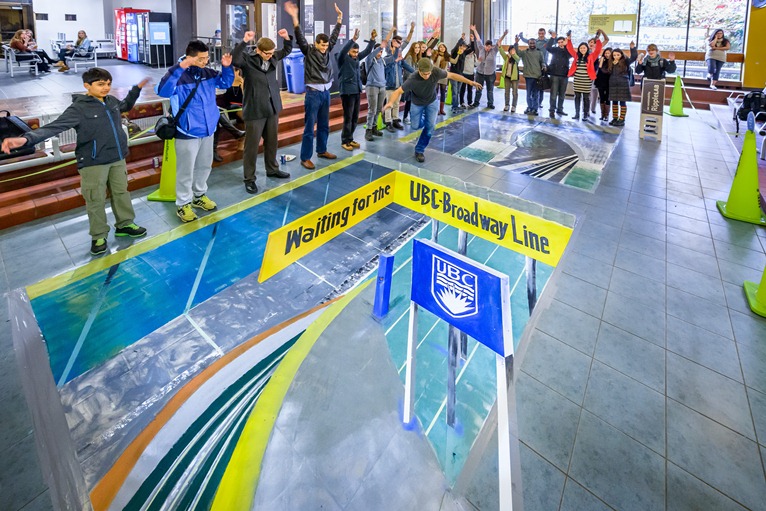 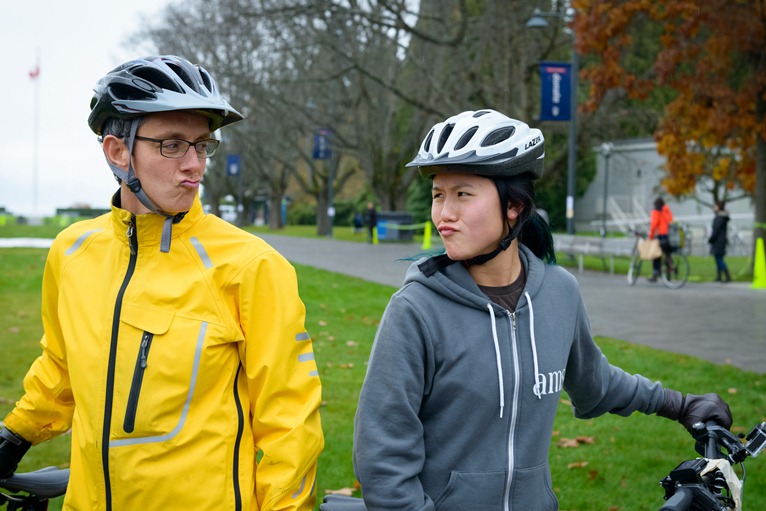 “Months after the campaign, the hashtag was still being used, which tells me that the concept of making a ripple – that a small contribution or choice you make in your daily life collectively adds up to real change in the world – resonates with people.” 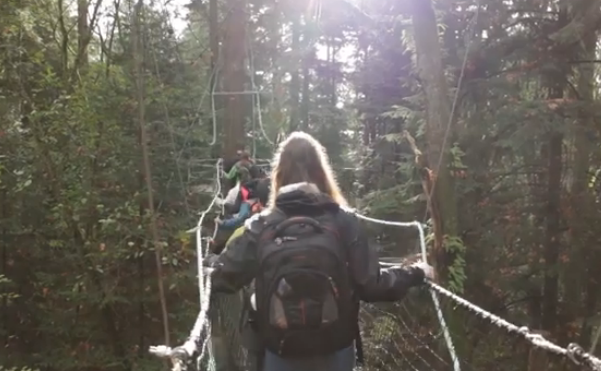 We are in the climate emergency together. Get inspired by UBC's response - read the first progress review.… https://t.co/3nQ8W3Ogc7
about 16 hours ago.

Join 'COP27 and the politics of power, people, and place' for an opportunity to hear from and speak with faculty an… https://t.co/N6Lb87tgKN
1 day ago.

📣 UBC Co-op students! Join the communications team at the Sustainability Hub and put your talents for social media… https://t.co/Ap30TfcyGt
1 day ago.

Join 'COP27 and the politics of power, people, and place' for an opportunity to hear from and speak with faculty an… https://t.co/cUdseiJvUn
3 days ago.

We are in the climate emergency together. Get inspired by UBC's response - read the first progress review.… https://t.co/G8AO6r14qQ
4 days ago.

📣 UBC Co-op students! Join the communications team at the Sustainability Hub and put your talents for social media… https://t.co/Q66BI8XnOF
5 days ago.

RT @UBC_ORICE: Join us on Nov 25th as we speak with Dr. Ameenah Gurib-Fakim about her extraordinary life as an academic and political leade…
6 days ago.

RT @ubc_hrc: Do we think of Canada when discussing major human rights-violating countries? Join us with Tricia Logan and Naomi Moses to dig…
6 days ago.

Join 'COP27 and the politics of power, people, and place' for an opportunity to hear from and speak with faculty an… https://t.co/MqsHzqfrJn
6 days ago.