Chongqing and UBC. One is a city of 34 million, the other is a community of 64,000 and despite being separated by an ocean and very different histories, they’re now to share a common future and ever stronger and more productive links.

In August 2013, UBC President and Vice-Chancellor Stephen Toope and a delegation of senior executive, deans and faculty travelled to Chongqing to sign an unprecedented and wide-ranging five-year strategic cooperation agreement with Chongqing and by extension, the government of the People’s Republic of China (PRC).

Professor Weihong Song, UBC Faculty of Medicine, Special Advisor to the President on China, says the agreement is an excellent fit and with wide-reaching synergies.

“Chongqing is the frontier of China’s western development, says Song. “It also has a very good and well developed university system in terms of the social sciences, engineering, law and medical education.”

“UBC is known as the top university in the world and the people in Chongqing or in China anywhere are looking for the top university. UBC has a long history of collaboration with Chinese higher institutions and is well regarded.”

It also helps, notes Song, that not only is UBC known for its depth of research and diversity in terms of “student and faculty populations,” Vancouver itself is “a very diverse, multi-cultural city; it’s a perfect fit for the collaboration with Chongqing.”

In terms of the level of government involved and the scope and potential, the agreement is not only a first for UBC – it has enormous potential benefits.

In a nation of more than 1.35 billion people and a national economy that will soon rival the United States, Chongqing is more than just another city. It has provincial government status – on par with Beijing, Shanghai and Tianjin – and with this broad administrative designation, it has deep domestic influence and strategic reach.

The other three provincial administrative cities are all set in the northeast and close to or on the coast; Chongqing is strategically set on the Yangtze river, alone and deep in southwest China; it commands the area and also boasts a rich seam of academic excellence: 34 institutions of higher education, six being first-tier universities.

Song’s own academic and medical career began in Chongqing more than 30 years ago. His long-established connections with former colleagues and classmates, coupled with an opportunity to work with the “top hospital in China for sick kids” and his own interest in the link between Down Syndrome and Alzheimer’s, “not only made [the possible UBC/Chongqing collaboration] an opportunity for my own focused research but for the whole university.”

Not only medical/life sciences but also business, engineering, the arts, urban planning and sustainable development, education, public policy and international law and what Song calls “other areas of mutual interest.”

As an entrepreneurial, solution-driven institution, UBC is committed to seeking out and opening up new academic and research collaborations with universities, research institutes, governments and business throughout the world.

“We are very interested in globalization and this collaboration provides a great opportunity for our students and faculties,” says Song. “We see what the opportunities are, those that can benefit not only us but the locals in Chongqing. Any opportunities are good for both sides and we would like to have those opportunities realized.”

Opportunities become goals and now via the trans-Pacific collaboration, they’re been achieved in a very tangible, large and far-reaching way. 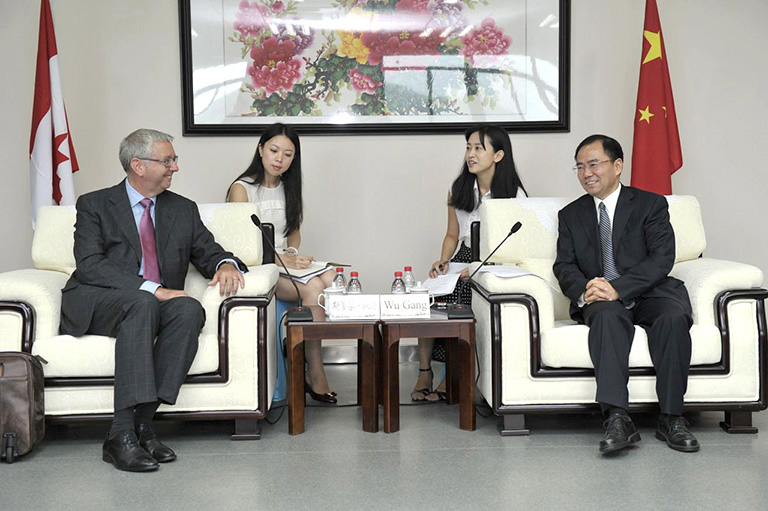 “Chongqing is the frontier of China’s western development. It also has a very good and well developed university system in terms of the social sciences, engineering, law and medical education." 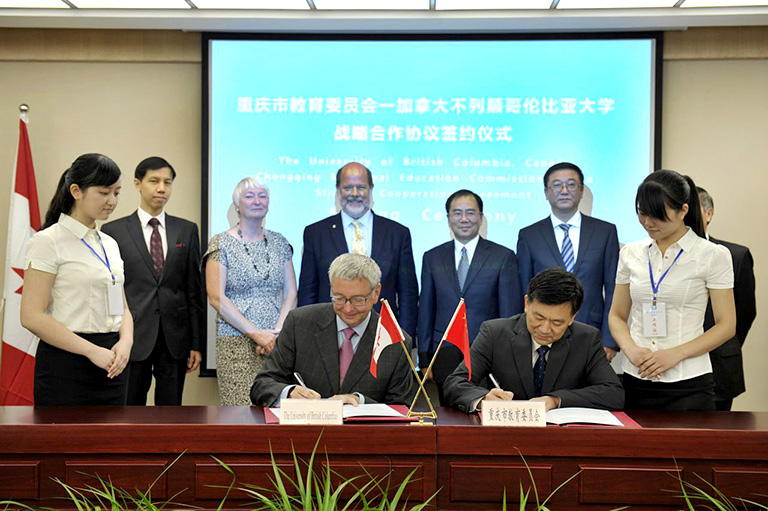