A Pass to Wellness

A Pass to Wellness

From the outside it’s a cross section of a huge wing held aloft, a bulbous airfoil of ribbed metal, the leading edge split open and filled with sweeps of glass. From the inside, it’s a showcase for the versatility of modern wood design and construction.

From any viewpoint the $4.1-million 850-square-meter Hangar Fitness & Wellness Centre addition to the UBC Okanagan (UBCO) gymnasium isn’t just an architectural uplift – it’s also the literal expression of the generosity of the university’s donors.

Here, it’s Barry Lapointe and family who on behalf of the employees at Kelowna Flightcraft made the core $3.5-million donation and asked only that the facility’s name and design reflect an aviation theme (to show their support of the industry) and be predominately wood construction that is sourced locally.

In return for the unencumbered generosity, at the official opening in September 2013, Barry Lapointe was presented with a lifetime pass to the facility. If he was pleased, so are the campus’s more than 8,400 students, staff and faculty, says Rob Johnson, UBCO director, Athletics and Recreation: “It’s a beautiful building and it’s incredibly popular with the staff, faculty and students.”

Before, in the old crowded facilities, there were the invariable ‘big spikes’ in September when classes began and in January when New Year’s resolutions are made, only to soon fade. With the new addition up and humming, Johnson says there are “little spikes but for the most part the continued use has been very high.” Memberships are also higher than projected; the Hangar is busy from open to close: “It’s been a tremendous enhancement to our ability to provide fitness opportunities as a component of campus life for the staff and students.”

When you’re working hard, the opportunity to exercise in an accessible, purpose-built quality environment and blow off the stress is a gift well worth hanging onto.

Designed by McFarland Marceau Architects in partnership with Kindred Construction, the Hangar has dedicated areas for cardio-exercise and strength training, balanced off with yoga, combat sports, spin bikes, Pilates and dance studios; something for everyone, with future plans for an interior climbing wall.

In turn, the athletics department now has a full-time fitness coordinator and almost a dozen fitness staff (most of whom are current students or alumni) who work in the group fitness and personal training areas. The 38-strong operations staff is made up of current students.

Work, work out, stay fit and spread the word.

Or as former varsity athlete, UBCO human kinetics student and self-described “gym rat” Simon Pelland told the local media at the opening event, the Hangar not only adds more rec space, it ups the overall campus appeal: “It might even recruit students to the area, because they see what we’re trying to achieve here.”

As Johnson puts it: “The addition of the Hangar has had a huge and positive impact, providing spaces to exercise, relax and socialize in a beautiful, warm and welcoming environment.” 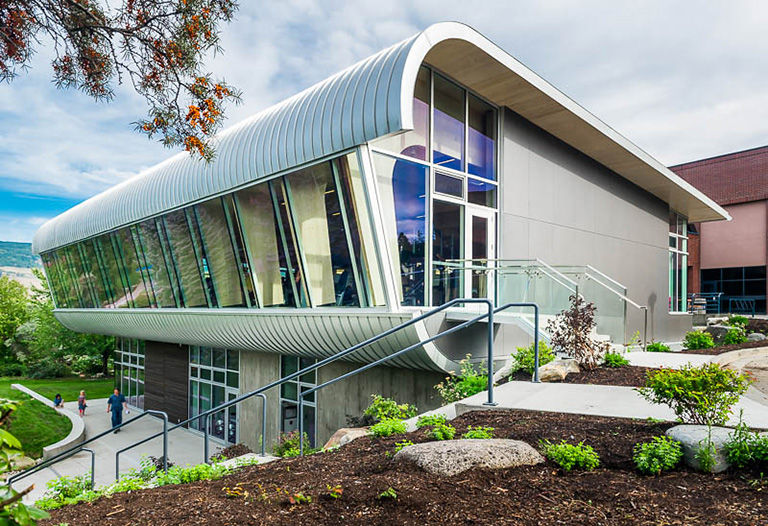 “The addition of the Hangar has had a huge and positive impact, providing spaces to exercise, relax and socialize in a beautiful, warm and welcoming environment." 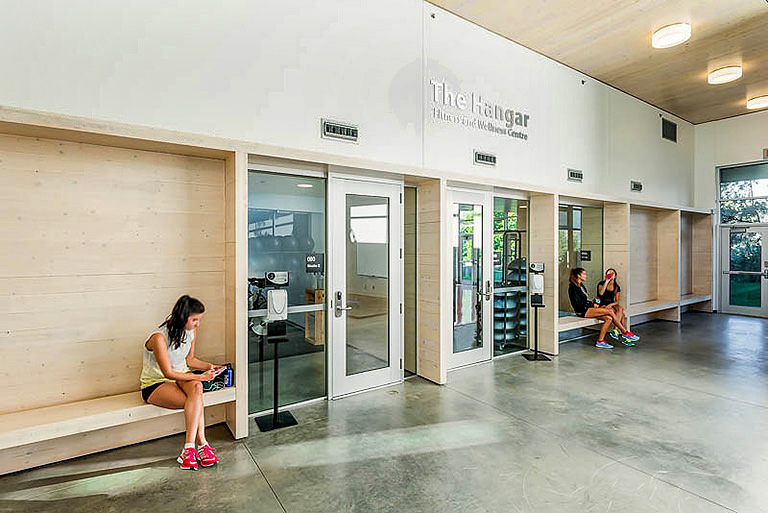